Please join me for a mitten adventure in the New Year!

I’ve just released my  fifth free video in my mitten-making series on my YouTube Channel!

Usually I wait until a project is well underway before filming techniques and sharing them with you but, this time, I’m inviting you to join me on an as yet undeveloped project.

I want to write a straightforward double-knit mitten pattern using my lovely new Blue Faced Leicester sport weight yarns. After that, nothing is certain.
Mittens are an excellent application for double knitting. As I record this journey I’ll try to explain my reasons for choosing various techniques.
There may be mistakes, recalculations and re dos! Please subscribe to my YouTube channelto be notified of developments as they unfold! 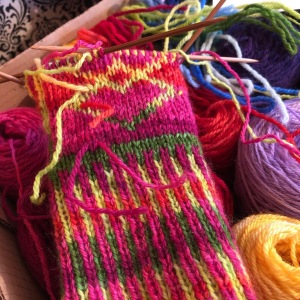 I realize that my husband’s retirement shouldn’t have come as a surprise, but even two years out there were no formal plans. It was business as usual for Judy Fawcett and me: Plans had been hatched for our next biannual Knitting Adventure Camp in late September 2017, and Nelson, British Columbia was our chosen destination.

Life moved on and, somehow, the idea of a long apres-freedom narrowboat trip intruded into our consciousness and wormed its way into being. DH was set loose on the world in mid-August. We’d both been so busy with work that we hadn’t had time to take our customary two-week boat trip earlier in the season.  This left us with only the autumn months if we were going to cruise the canals in 2017.  September to December seemed perfect… apart from the Adventure Knitting commitment from September 24 to the 30th.

The Queen Bee: our home-away-from-home!

After much discussion, it was determined that the only way to have my cake and eat it too was for me to leave for our UK journey at the end of August, temporarily return to Canada, teach the workshops, then head staight back to the boat as though nothing absurd had just happened. Problem solved!
This manoevre took on the nature of a military operation.
There were several steps to be taken in Canada before the September departure:
Step 1 – May – June: prepare the workshop notes, design, knit and write the Selkirk Mittens pattern.
Step 2 – July: order the yarns for the class knitting kits.
Step 3 – August: pack a large box with my teaching clothes, projector, and knitting kits; ship it out to Judy on the West Coast.
Step 4 – Find a 10 day berth for our boat and book it.  As our rental agreement precluded single-handed operation of the boat, we’d have to find somewhere within 19 days cruising range of our starting point near Oxford. This mooring would also need to be near a railway station, be pleasant for DH, and secure for the Queen Bee.
We hit upon theNational Waterways Museum in Ellesmere Port, conveniently near DH’s mother. Could we book a berth there for the period? Luck was with us – yes, we could! All locked in (both by canal locks and padlocks), she could safely be left unattended if needed for a few days.
Step 6 – Plan the voyage to reach Ellesmere Port in time to catch a train to London to get to the airport to fly back to Canada. We would be picking Queen Bee up from just north of Oxford, and estimated that it would take 15 days cruising to reach our destination.   Bearing in mind that a cruising day may not go according to plan, and that time  also has to be budgeted for food shopping on foot, taking on fresh water, pumping out the sewage holding tanks, picking up diesel, or for canal lock hiccups, we gave ourselves 20 days. We even worked in a contingency plan that I could be dropped in Chester near the station should we be delayed any further.
With all this in place or planned, we were ready to head to the UK. 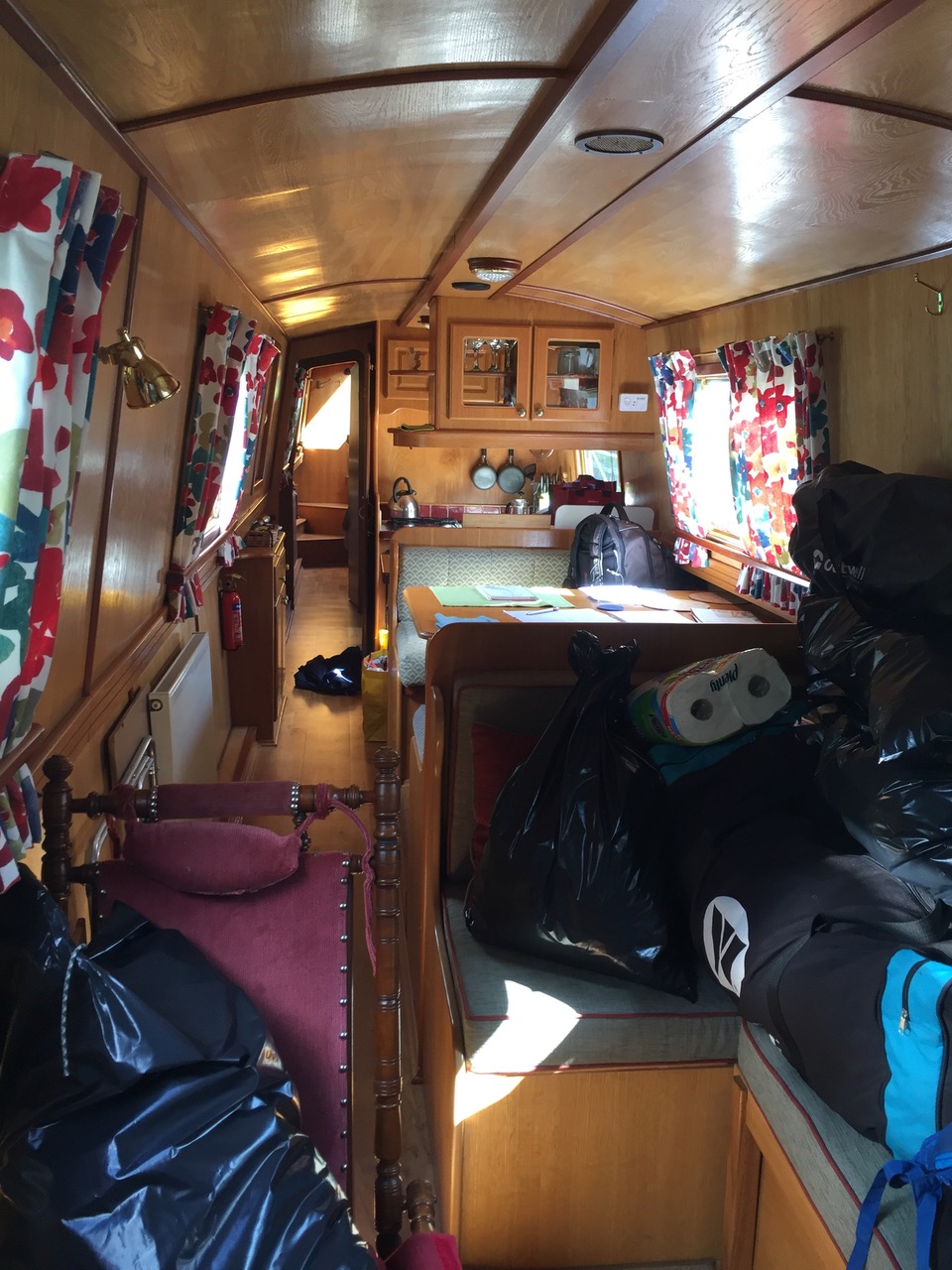 Space is at a premium on a narrowboat (they are not called narrow for fun), so we decided  to empty all our worldly goods into plastic bin bags to take on the Queen Bee, with the exception of one carry-on size suitcase for me to use on my return to Canada.

In high spirits and with much anticipation, we set out on our voyage.

Check out our weekly half-price patterns at LucyNeatby.com.
This week we are featuring my Selkirk Felted Mittens!
These mittens are named for the Selkirk mountains that surround Nelson, British Columbia, the venue for my Adventure Knitting camp 2017. This speedy and warm mitten incorporates a number of interesting techniques: a ‘reducing’ waste yarn opening for the thumb, an un-fulled cuff (for maximum draft exclusion) and a tubular bind-off!
The Selkirk Felted Mittens pattern is half-price ($4.50) until February 27,
Happy Stitches!

A pair of matching Paradoxical mittens.

Here’s a Knitting Hint: Dare to compare! When you are debating with yourself about the very best way to hold your yarns or knit up stitches, the most suitable decrease or buttonhole, or any of the other myriad of choices we face as engaged knitters, take a little time to play. Try the various methods open to you. Practice them in close proximity so you can directly compare the results.

Public side comparison of the same two Paradoxical mittens: note the difference in colour dominance

Making a small swatch, looking at it, ripping it out and then redoing it another way won’t give you the necessary comparison. It is not a truly useful experiment.

The pictures above demonstrate an extreme example of colour or stitch dominance, shown using my Paradoxical Mittens pattern. The samples show identical mittens – but one was worked with the dark yarn as the contrast (held in left hand), while the other was worked with the yarns held the other way.  What incredibly different results!   Either one would look fine on its own, but they don’t work as a pair. As you see, the difference is not evident unless we compare them side by side. (By the way, there is no need to work a whole experimental mitten, a modest swatch will usually do nicely!)

I love it when at workshops the cry goes up: “My goodness, you are right!”  It’s not that I’m on a power trip, wanting everyone to do things my way, but I do like knitters to explore their options and come to their own conclusions.  If it happens to be the same one I reached, that’s cool, but it doesn’t have to be.  Different techniques work differently for different people.  Occasionally, there is no ‘right’ answer — only the one best suited to you, your yarn and your knitting circumstances.  Experimenting with the options available to you is fun and educational: that’s why I included the small “Challenge Swatches” at the end of each chapter in my Cool Knitters Finish in Style book, inviting you to try a variety of methods and draw your own conclusions. Be curious: play with your stitches, make them smile! 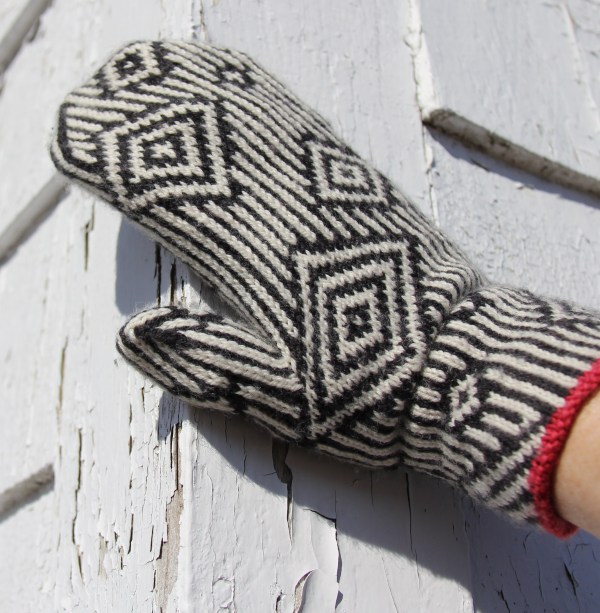 The Paradoxical Mittens are on sale for half-price this week only!  Before you begin your project, try working with the dark yarn as the contrast in one swatch and the light yarn as contrast in another.  See the difference?